Wave Crossings is now open on Governor's Island in Nolan Park, building 7A as part of the New York Electronic Art Festival.

The exhibition is open Fridays, weekends, and holiday Mondays from noon to 5pm every week until July 23rd. 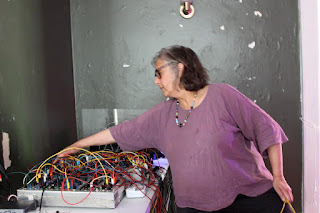 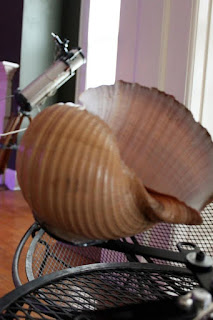 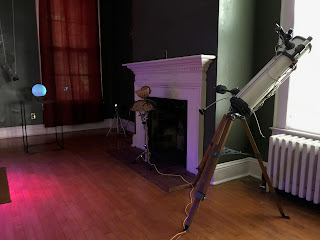 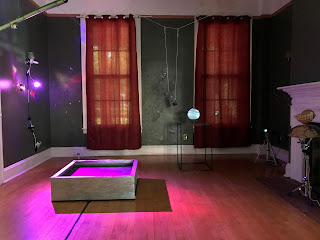 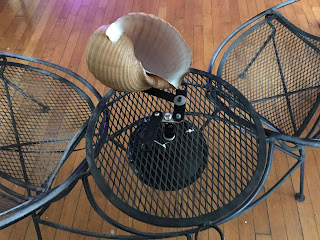 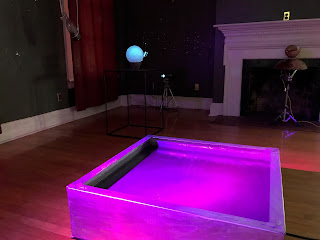 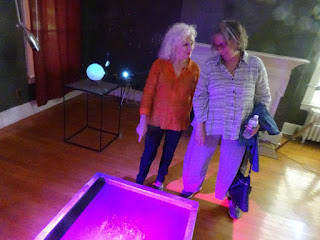 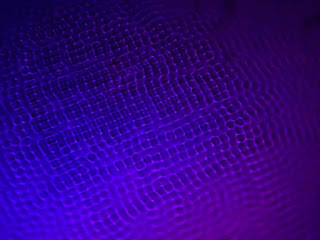 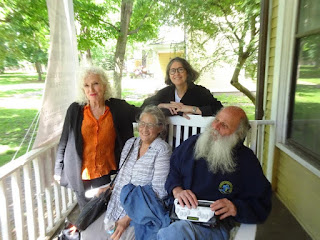 
“Wave Crossings” is a soundscape/landscape created by Liz Phillips. Phillips has been recording sounds and exploring Governor’s Island and its history since 2014. The video is of fog rising one early morning over Governor’s Island. During a fog you can hear the foghorns, bell buoys and boat air horns of the New York Harbor. These sounds were discovered by Phillips on an old navigation map of Governor’s Island.  The other recordings were made close to and under the water’s surface at the Billion Oyster Project’s dock. The telescope at the window picks up light changes from the sky and the moving leaves. In real time Phillips translates the telescope’s view into sound changes that create patterns in the wavetable.  Other objects in the room act as filters and tactile speakers. Ultrasonic automatic focuses from cameras across the hallway entrance cause changes in the room’s sound based on the viewer’s presence and motion. The glass sphere shows the boats riding in Buttermilk Channel as we record in the morning fog.

One of Liz Phillips’s ongoing projects is to make installations based on her observations of different waterscapes. In “Here/Hear: Manhattan is an Island” (2010) Phillips worked with recordings made simultaneously around Manhattan Island. In “Spectral Reservoir” (2011) Phillips recorded the oceans around the Long Island Sound. In “Niagara Sound Composition 1974/2010” Phillips made recordings near Niagara Falls for the first exhibition of Artpark(1974) and the Albright-Knox Art Gallery(2010).

Liz Phillips has been making interactive multi-media installations for the past 40 years, which combine audio and visual art forms with new technologies to create an interactive sound experience. Born in New Jersey in 1951, Phillips received a B.A from Bennington College in 1973. She received the John Simon Guggenheim Fellowship in 1987. Phillips has made and exhibited interactive sound and multimedia installations at numerous art museums, alternative spaces, festivals, and public spaces. These include The Whitney Museum of American Art, the San Francisco Museum of Modern Art, the Spoleto Festival USA, the Walker Art Museum, Ars Electronica, Jacob’s Pillow, The Kitchen, and Creative Time, Stedelijk Museum, Gemeentemuseum Den Haag, Rene Block Gallery, Fredrieke Taylor Gallery. Phillips has also collaborated with the Merce Cunningham Dance Company, and her work was presented by the Cleveland Orchestra, IBM Japan, and the World Financial Center.

Thank you to Carol Parkinson and all the interns at Harvestworks for their continued support on this project, Matthew Haiken of the Billion Oyster Project, and many other people working on to maintain this special space that is Governor’s Island.

When you get to the parlor of Buildin 7a in Nolan Park we invite you to sit in my mother’s circular garden chairs and listen and feel the sound.

Enjoy your ferry ride and visit!

Robert Scheuering has created and maintained this blog http://lizphillipsgovsisland.blogspot.com/ for the Wave Crossings Project.

Wave Crossings opens on Governor's Island as part of the New York Electronic Arts Festival with Harvestworks on May 26th and closes July 23rd.

Location: Governor's Island Building 7A, Nolan Park
Dates and Times: Friday, Saturday, and Sunday and Holiday Mondays from May 26th thru July 23rd, 2017 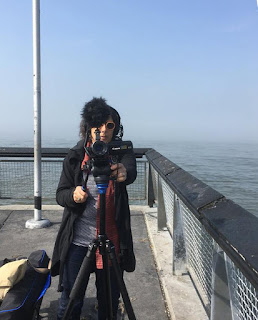 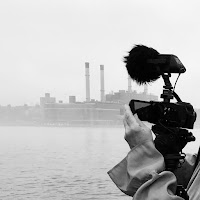 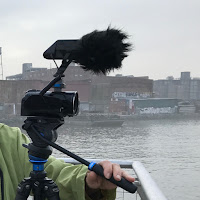 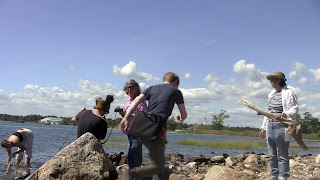 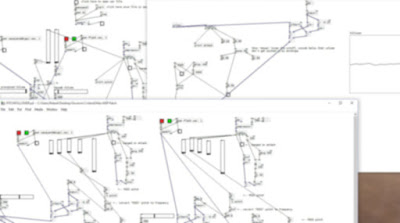 These are the patches being used in Wave Crossings. The patches were first modeled on Liz Phillips' Wavetable using analog synthesis. They were then made in Pure Data with modules taken from help files and online linked together and re-appropriated for the piece. . Liz and I have been working on the patches since early July. They process looped recordings by changing the pitch of playback and center frequency of a voltage-controlled filter based on live audio input. Another patch plays back live audio at regular pitch and transposed up. This patch also includes an inverted envelope follower that decreases the volume of playback as live audio gets louder.
-Rob Scheuering
at 3:06 PM No comments:

A humid early morning—Bastille Day, New York.
Liz and I cross the 59th Street Bridge along with the rush-hour traffic and head to South Ferry to board the Governor’s Island ferry.  We’ve got a lunch packed, recording equipment and raingear. The ride across the East River is quick; we’re waved ashore and park near the New York Harbor School’s maritime program office to don life preservers, required while on the dock.  Our mission:  record low frequencies from the dock pilings. [photo 1] Liz busied herself rigging her bamboo pole and fishing rod with shells housing microphones for underwater recording [photo 2-4]; I listened to the roar of the air and water—helicopters every few minutes; a few motorboats and barges, ferries—and watched the thunderhead clouds move down the East River.
Liz put me in charge of turning on the recorder as she stood on the edge of the dock with the microphone inside the piling—a mistake, as I didn’t push the on button correctly. By this time, a group of students and their teacher had arrived to attend to the many crate of oyster shells sunk in the river’s muck, part of “the billion oyster project” overseen  by the Harbor School. http://www.billionoysterproject.org/  The project aims to place one billion spat-on-shell oysters in the harbor by 2030 and the students were there to haul up the seed oysters, clean them off, check to see if the shells had spats, sort them and replace the good ones into crates.  They worked diligently creating wonderful sounds as the crates crashed against the metal grates of the deck and the oysters clattered inside.  [photos 5-8].
By now the rain was beginning to sprinkle and we needed to cover the equipment but were able to get some of the sounds recorded before the gray sky turned darker and even the students had gone for shelter.  We hauled the microphones, recorder, headphones and gear back to the car and sat out the storm eating sandwiches.
The dock, with its ropes and cages and paddles—the detritus cluttering any dock along the coast—beckoned. [photo 9-10] The sky cleared and we set to explore Fort Jay, once an army fortification, then a coast guard station now a national park, housing a video installation.  A strange beat grew louder and the rain burst in a torrent. So we waited it out under an awning, listening to the streams of water above our umbrellas. It was time to leave. 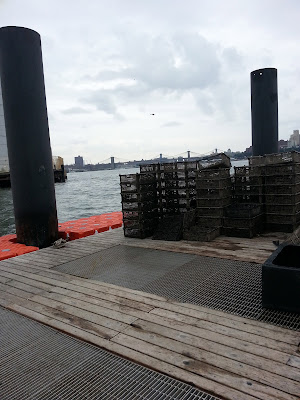 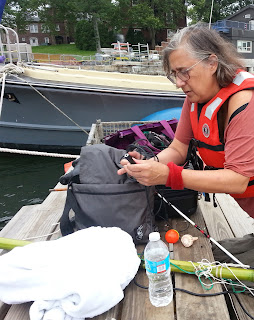 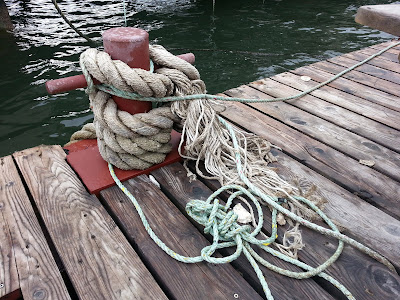 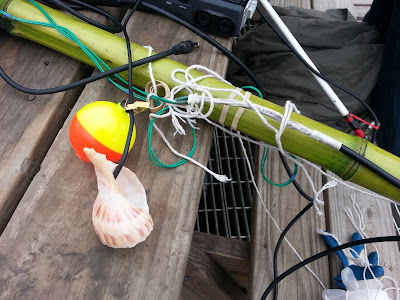 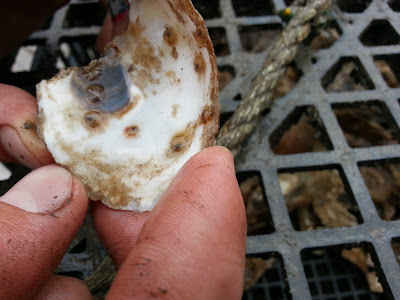 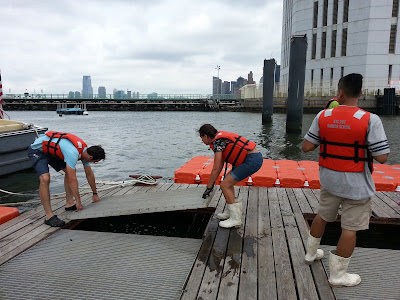 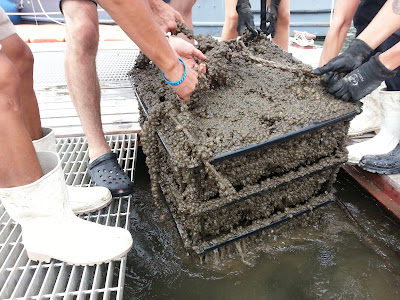 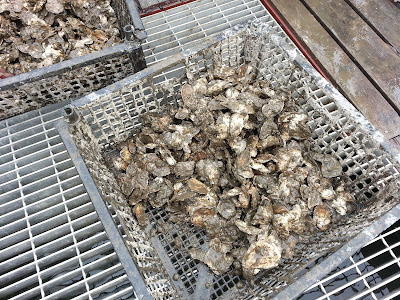 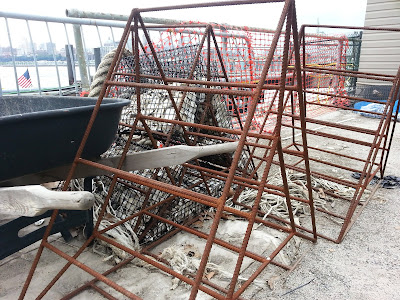 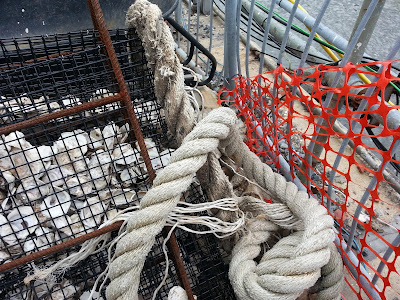 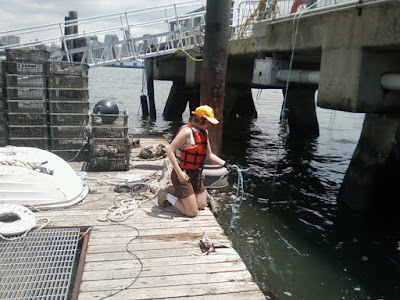 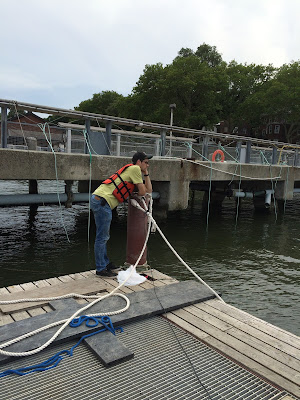 Robert Scheuering
at 7:49 AM No comments: 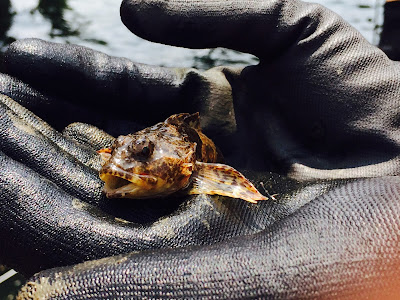 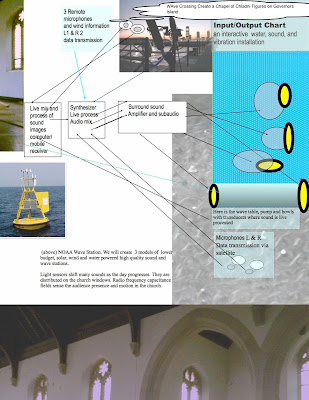 Liz Phillips: Wave Crossings create Chladni Figures in this wave, sound and site-specific installation.The audience/participants explore, creating patterns that amplify and reinforce the sonic architecture of the chapel. Multi-channel simultaneous recordings from the waters around the Island create the sound and signal material for the installation. Movement is sensed using ultrasonics and telemetry systems to create an ever-changing dynamic water and soundscape.

THE STAINED GLASS / WAVE TABLES-  The changing light from the three sides of stain glass windows and the waves in the table. They mix as projected and reflected light and changes in the sound in the church through processing.
Chladni figures appear like live script being written in illuminations on the Wavetable, a surface of water modulated with sub audio and audio..

THE MIX—LISTENING – Light shifts as well as movement within and is harnessed to change the sound.
Listening, like in a rowboat, we are immersed in deep sonic patterns.Many sounds begin and end like waves rolling in with great force and shape.
The sound palette (with filters, transposition, synthesis and live processing) will vary, with deeply resonant voices, configuring and reconfiguring. 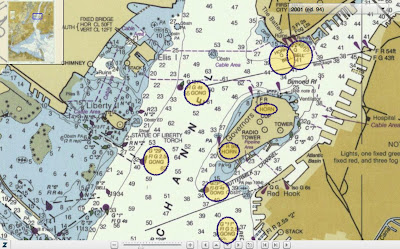